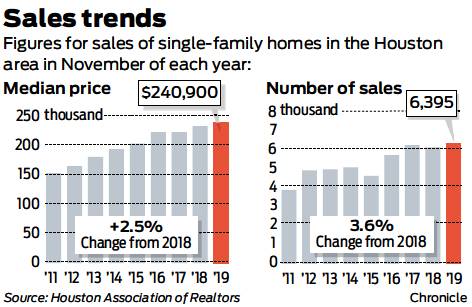 Houston’s feverish housing market is poised for another record year as low mortgage rates, population growth and a relatively healthy economy fuel sales throughout the region.

Nearly 79,000 single-family homes were sold in the first 11 months of the year, with year-to-date sales running 4.1 percent ahead of 2018’s record volume, according to data from the Houston Association of Realtors. Sales in 2018, the previous record, totaled 82,229.

Houston-area sales were up 3.6 percent in November, the fifth straight month of higher year-over-year sales, the association said Wednesday in a monthly report. Buyers closed on 6,395 houses in November at amedian price of $240,900, up 2.5 percent from last year.

Demand continues to be strongest in the lower- and mid-priced housing segments. Sales of houses priced between $250,000 and $500,000 were up 12.5 percent over last year.

Still, healthy increases in the median price have moderated over the past several months, HAR’s data show. Since July, year-over-year increase have gotten smaller.

A slower luxury market is part of the problem. Sales last month of properties priced at $750,000 and up were off 9 percent from the year-earlier period.

“The bulk of the city is thriving. It’s the smaller luxury market that’s struggling alittle bit right now,” said Amy Bernstein, founder of Bernstein Realty, a brokerage based in the Memorial area.

She attributed the upper-end slowdown to last year’s tax reform, which resulted in a $10,000 cap on property tax deductions. That’s meaningful for luxury homeowners in Texas, which has some of the highest property taxes in the country.

A slackening of demand has caused prices to fall on many of the city’s seven-digit listings.

For buyers, “there’s some tremendous value in the marketplace today.”

Slower job growth in the coming year is likely to affect housing activity, too.Houston employers are expected to add 42,300 jobs in 2020, according to estimates from the Greater Houston Partnership, down from 64,400 jobs expected to be created this year.

Months inventory — the estimated time it would take to sell all the houses on the market based on recent activity — was unchanged in November, coming in at a 3.8-month supply. A six-month supply is generally seen as a balanced market where neither buyer nor seller have the upper hand; shorter periods are seen benefiting sellers.

A closer look at inventory figures show the lower the home price, the less inventory was available. The market for homes priced between $200,000 and $250,000 had 3.1 months of inventory in November, while the $1 million-and-up market had a 11.4-month supply.

“The end of the year typically brings a slower pace of home sales, so we welcome another month of gains and attribute it to continued low interest rates in a market that has added more than 80,000 jobs over the past year, according to the Texas Workforce Commission,” HAR’s Chair Shannon Cobb Evans said in the report.

Trackback from your site.

Our agents write often to give you the latest insights on owning a home or property in the local area.